Ranking SEC's top 10 defensive linemen: Alabama football has 3 of them, but who's No. 1? 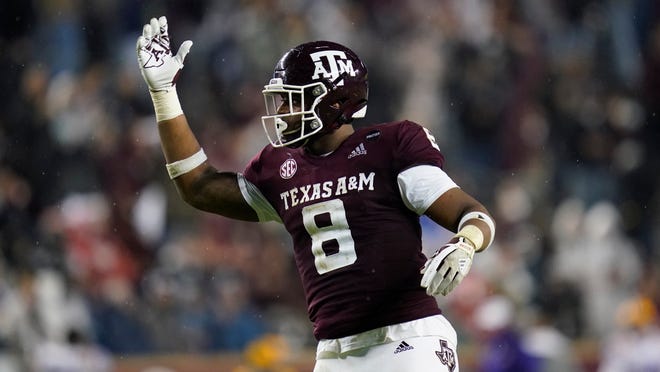 Alabama football has three of the top 10 defensive linemen in the SEC, according to a poll of sports journalists who cover the league for the USA TODAY Sports Network, but the best defensive lineman in the league plays for Texas A&M.

The USA TODAY Sports Network is counting down to SEC Media Days, scheduled for July 19-22 in Hoover, Alabama, by revealing its top players at each position grouping.

Here is a look at the SEC's top 10 defensive linemen:

Leal is one of the nation's top defensive prospects. He had 37 tackles, 2.5 sacks, four pass deflections, an interception, a forced fumble and a fumble recovery in 2020.

Cox registered 41 tackles, 9.5 tackles for loss and four sacks in his first season with the Gators. He made the All-SEC second team and could push for first-team honors this year.

The returning first-team All-SEC player rejoined the Tigers several days before their 2020 opener after a brief stint in the transfer portal. Jeffcoat tied for the SEC lead with six sacks.

The team’s best defender at 6-foot-4, 260 pounds, Enagbare has a knack for making plays in the backfield. He’s among the best in the SEC at getting to the quarterback and posting tackles for loss.

Davis commands double-teams at the noseguard position. The 6-foot-6 Charlotte native leads a formidable run defense, but coaches want him to drop some weight.

Gaye led LSU with 9.5 tackles behind the line and was second with two sacks on a bad defense in 2020. He will be key for new defensive coordinator Daronte Jones, who inherits the worst unit in school history.

Ray can be one of Alabama’s best on the defensive line when healthy. In his most recent complete season, 2018, he tallied 39 total tackles, six for loss and 2.5 sacks.

Dale returns as a physical presence in the middle of the Crimson Tide defense. He tallied 22 tackles, one for loss, and broke up two passes in 2020.

Paschal totaled 6.5 tackles for loss in 2020 despite being slowed by several minor nagging injuries in second half. He is now two years removed from immunotherapy treatments for malignant melanoma.