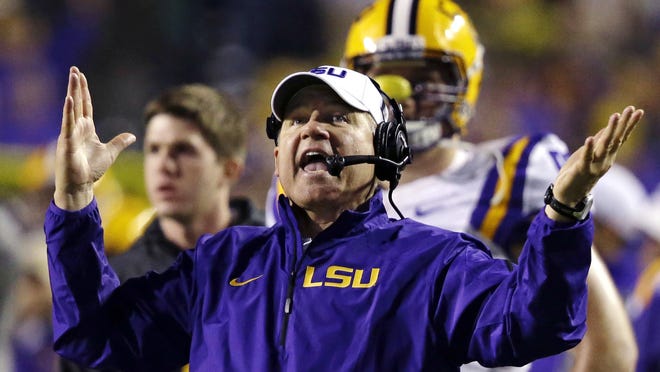 The complaints by Sharon Lewis, LSU associate athletics director of football recruiting,  in a $50 million Title IX lawsuit against LSU filed April 8 were forwarded to the EEOC on Friday, Lewis' attorneys told told The Daily Advertiser.

Lewis' claims of LSU officials retaliating against her for reporting sexual harassment accusations against then-football coach Les Miles in 2012 will be investigated by the EEOC, a federal agency that administers and enforces civil rights laws against workplace discrimination.

"The EEOC will determine the right to sue for the discrimination that we believe Ms. Lewis has been subjected to for years," said attorney Tammye Brown, who is also representing Lewis. "This could lead to a federal lawsuit in addition to the Title IX federal lawsuit."

LSU attorney Winston DeCuir Jr. has received a copy of Lewis' charge of discrimination sent to the EEOC.

"We don’t respond to a charge until we receive notice directly from the EEOC," DeCuir said Sunday. "The filing occurs, and then we receive official notice from the EEOC."

DeCuir is already busy with two U.S. Department of Education investigations of LSU related to the school's handling of sexual misconduct allegations by female students against former football players Derrius Guice (2015-17) and Drake Davis (2016-17). Those were spelled out in a March 5 report by the law firm Husch Blackwell , which LSU hired in November after a  USA TODAY investigation.

In addition, the Louisiana Senate Select Committee on Women and Children has been investigating LSU's practices toward the accusations.

"The Department of Education does have the authority to pull LSU's right to receive any federal funding," DeCuir said at an April 8 hearing before the all-women committee that pelted him with questions as 10 LSU officials chose not to appear. "We are cautiously optimistic that will not occur, but the loss of federal funding is the ultimate enforcement mechanism."

Lewis explains in the four-page charge of discrimination delivered to the EEOC that LSU officials have continued to mistreat her after the release of the Husch Blackwell report. She singles out LSU associate athletics directors Verge Ausberry and Miriam Segar, who were suspended for a month after the report said they did not properly respond to accusations against Guice and Davis.

Ausberry has returned from suspension in his same role, while Segar has been reassigned and no longer handles sexual assault accusations against LSU athletes.

"In a March 22, 2021, staff meeting and discussion of the Husch Blackwell Report, it was stated, in my presence, that the athletic department needed to have a new Title IX policy for 'Tattletales,' " Lewis says in her statement to the EEOC.

"It’s unclear who made the comment, but Ms. Lewis felt targeted because everyone knew she had reported Title IX complaints," Brown said.

In a staff meeting on March 19, Lewis says she asked to serve on a Title IX committee, and LSU deputy athletics director Stephanie Rempe said that would be "inappropriate."

Lewis, an LSU football office employee since 2001 who became an assistant athletics director in 2007, says she was left off the committee "because I reported race and sex discrimination" in the athletics department.

"The retaliatory treatment on March 19 and 22 demonstrate LSU is continuing the same retaliation against Ms. Lewis with a hostile work environment and disparate treatment," Brown said.

Lewis says she was "verbally berated" by Ausberry and Segar during a meeting with former athletics director Joe Alleva, who left in 2017.

"Ausberry told me I only relate with the Black players, which he knows was not true," Lewis says. "And Miriam Segar told me I only had my position because of Nick Saban."

Lewis, an LSU track athlete in the 1990s, was hired as a coordinator of Tiger Pride at LSU in 2001 when Saban was football coach. She oversaw female students who hosted recruits and continued in that role until 2007 when she became assistant athletics director of recruiting/alumni relations under Miles. He was in his third season after replacing Saban, who left after 2004 to become coach of the Miami Dolphins.

Lewis says the mistreatment of her escalated in 2012 after she reported Miles' "sexist and racist behavior" that included him saying her recruiting hostesses were "too fat, too ugly, and too black" and that he wanted more shapely "blonde girls."

At this time, Lewis says that Ausberry told her often that I "needed to go find another job" and "should have taken a job at Alabama." Saban had left Miami for Alabama after the 2006 season and won six national titles with the Tide between 2009 and 2020.

Lewis was promoted to associate athletics director in 2020, but she says she received no raise. When she complained to Ausberry, she says he said, "You will never be promoted because you file Title IX complaints" and that she uses "the word Title IX too much."

On Oct. 1, 2018, LSU investigated Lewis for failure to report a Title IX complaint, according to her statement, and LSU found her in violation of LSU policy.

"I learned in December of 2020 that the disciplinary action remains in my personnel file," she says. "I have suffered a continuing pattern of disparate disciplinary treatment because of my race and gender."

Lewis concludes by quoting Husch Blackwell, which said she "was the only one in the athletic department that repeatedly reported Title IX violations."